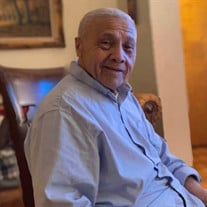 Constantino "Lare" Gonzalez Malave, age 87, also known as "Carmelo" was accepted into God's loving embrace on Friday, May 15, 2020, surrounded by his loving family. Constantino was born on March 22, 1933, in Lares, Puerto Rico to the late Leoncio Gonzalez and Adela Soto Malave. Leaving his home of Lares, Puerto Rico in 1952 in search of opportunity, Constantino made his way to New York City, where he lived and worked until 1954. He then moved to Trenton, NJ which he made home and became the patriarch of the Malave family for the last 66 years of his life. Left to cherish his wonderful memory are, his wife of 54 years, Cielito Malave, his loving children Graciela Malave-Medina, Constantino Malave Jr., Damian G. Malave, Jose A. Malave, and Wanda Malave-Johnson; two daughters-in-law Diane Malave and Felita Colon-Malave; two sons-in-law Angel Medina and Duane Johnson; eleven grandchildren Damian Malave Jr, Madison Malave, Priscilla Malave, Adriana Medina, Marina Malave, Christian Malave, Constantino Malave III, Anthony Medina, Sarah Johnson, Felix Malave, Savanna Johnson and; three great-grandchildren Damian Angel Malave, Carmelo Anthony Malave, and Orlando Malave. He also leaves many brothers and sisters-in-law, nieces, and nephews residing in Trenton, Chicago, and Puerto Rico. He is predeceased by his two brothers Evaristo Gonzalez Malave and Enmanuel Sorano Gonzalez. Constantino is survived by his sisters Maria del Carmen Malave, Maria Teresa Quiles Malave, Ana Luisa Quiles Malave, Ramonita Quiles Malave and his brother Pedro Enrique Segarra Malave. After 25+ years, he retired from American Standard. He also spent 10+ years at Good All Rubber. Constantino was a long-time active parishioner serving in the Holy Name Society of both Our Lady of Mt. Carmel and Cathedral of St. Mary the Assumption churches in Trenton, NJ. He enjoyed spending quality time with his family and watching his children and grandchildren play sports. He loved to sing, was a boxing enthusiast, playing the lottery, going for long walks, and praying. He was known for his kind spirit, his strong Catholic faith, an infectious laugh, and his million-dollar smile. Constantino was loved and adored by many. He will be greatly missed! For those wishing to make donations, the family has requested that in lieu of flowers, a donation can be made out to Cielito Malave via Cash App at $CielitoMalave. **Due to gathering restrictions services are private**

The family of Constantino Gonzalez Malave created this Life Tributes page to make it easy to share your memories.

A comforting word from you means a lot.